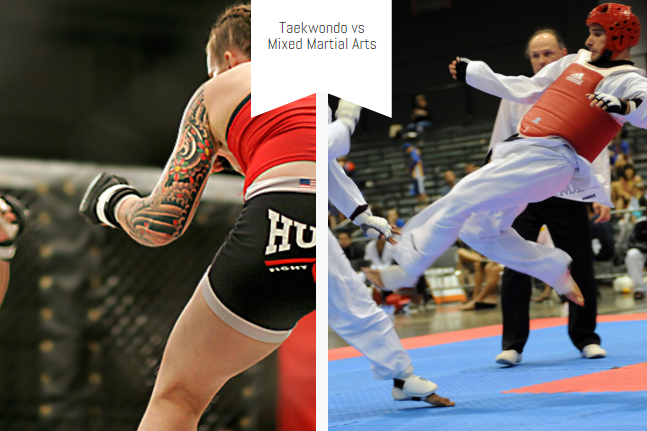 What do you know about taekwondo? Do you know it enough to play it? What about the mixed martial arts?  Are those two the same? Those are the questions you need to answer before you could be an expert in either of the sport.

There are many styles of Martial Arts including Taekwondo, Judo, Kung Fu, Muay Thai and Mixed Martial Arts. Among these styles, Taekwondo ranks supreme for self-defense. On the other hand, Mixed Martial Arts is a very popular style with a pay-per-view business that rivals boxing as a sports competition. The two sports have a few similarities but have a major difference with each other.

As said earlier, taekwondo is the best style for self-defense. It is a style that is used to fight several people at the same time. As you progress in Taekwondo Training, and the Belt Levels, you will learn techniques to fight multiple persons at the same time yet effectively fighting one person at a time.

You will also be able to learn techniques that are not solely for competitions, but for defending yourself. You will also learn using weapons in fighting like short and long sticks, nun-chucks, knives and swords. During a fight, you have a better chance of surviving with this style and its techniques.

Although its main purpose is for self-defense, Taekwondo is not only about technical fighting skills, it is also about enhancing and improving life skills.

Mixed Martial Arts is a full contact combat sport that uses striking and grappling techniques. This style of martial arts is popular as a modern sport competition. The core of the MMA Sport Competition is consist of boxing, as well as kickboxing and muay thai, wrestling, grappling and judo. MMA Training focuses on combining stand up fighting skills with ground fighting techniques.

Read also the Rules of a Taekwondo Competition, Choosing the Right Taekwondo Class and The Benefits of Taekwondo.

You are on this page because you want to know about the Taekwondo basic moves in Clubs in Sydney, right? ...
Read More
August 29, 2018

Female boxing classes Sydney are continuously growing more popular all over the world. It is now available for everyone who ...
Read More
February 14, 2018

By considering to enroll your children in kids self defence Sydney program, it is already established that you want them ...
Read More
February 14, 2018

What is the first thing experts would recommend when it comes to pre-exercise routines? The answer to this is to ...
Read More
January 17, 2018

Martial Arts instructors are undoubtedly the heroes who help students reach their full potential. They provide you with the passion ...
Read More
January 17, 2018

Hundreds of ideas for birthday parties are reused over and over again. The most common ones include cowboy theme, space ...
Read More
December 12, 2017

Kickboxing Western Sydney is one of the most popular martial arts practiced worldwide. It attracts a lot of new students, ...
Read More
November 20, 2017

What else can I learn from Adult Taekwondo Classes? Most people take up adult taekwondo classes to gain physical strength ...
Read More
November 20, 2017